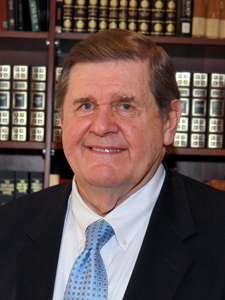 Dr. Joe Morecraft is a preacher of the gospel and a noted lecturer on contemporary political and historical trends in the United States. He has produced the first comprehensive commentary on the Westminster Larger Catechism, a five-volume set entitled Authentic Christianity. This 5,000 page work dissects and explains the teachings of this oft-neglected encyclopedia of biblical truth for today’s readers in language they can understand. His published works also include two books, How God Wants Us to Worship Him: a Defense of the Bible as the Only Standard for Modern Worship, and With Liberty and Justice for All: Christian Politics Made Simple. He has published hundreds of articles in various periodicals and newsletters. Dr. Morecraft was born in 1944 in Madison, West Virginia and holds a B.A. in history from King College in Bristol, Tennessee, an M.Div from Columbia Theological Seminary in Decatur, Georgia, and a M.Th. and Th.D. from Whitefield Theological Seminary in Lakeland, Florida.

Originally ordained by the Presbyterian Church in the United States, Pastor Morecraft has pastored churches in Virginia, Tennessee, and Georgia. He was the founding pastor of Chalcedon Presbyterian Church in 1974 and ministered there for over 40 years. He has assisted in planting several other churches in the Atlanta area including a new mission work, Heritage Presbyterian Mission, Reformed Presbyterian, Hanover Presbytery based in Cumming, GA. Pastor Morecraft regularly conducts seminars and conferences around the country and internationally. He has addressed civic, medical, military, political, religious, and educational groups in Scotland, England, Germany, El Salvador, South Africa, Cypress, Ukraine, Argentina, Paraguay, Chile, and Ecuador where he speaks on a variety of theological, historical, and social issues.

In addition to the two books already listed, Dr. Morecraft has published a book in South Africa, Liberation Theology: Prelude to Revolution, and authored numerous articles on national defense, international relations, constitutionalism, as well as various economic and social issues. He contributed a chapter in D. James Kennedy’s A Nation in Shame; a chapter in A Comprehensive Faith: An International Festschrift for R.J. Rushdoony, and a chapter in The Theology of Christian Resistance.

Dr. Morecraft and his wife Becky have four children and ten grandchildren.

From Friends of Heritage

I contacted this ministry because I was looking for Dr. Joe Morecraft, a teacher on SermonAudio.com. It is very difficult to find good teaching on the book of Leviticus, a book I think is the Bible’s best-kept secret. I read the incredible commentary by Andrew Bonar, which made me thirsty for more. I searched on SermonAudio and found Dr. Morecraft and his remarkable, in-depth series. I wish I could adequately express my appreciation. I will also be studying more of the series Dr. Morecraft teaches through SermonAudio — I am so grateful to have found such a wonderful teacher. My pastor is John MacArthur, who profoundly exposits the New Testament, and now I’ve found a pastor who goes into equal depth in Old Testament books. Bless you.~Carol S.